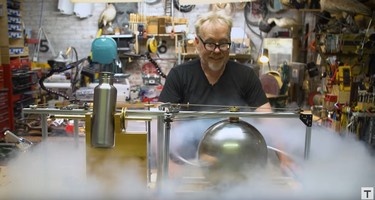 Adam Savage, from Mythbuster fame, is a well known maker. For a video sponsored by Starbucks he made an aeolipile – or Hero’s engine using OpenBeam (15x15mm). The engine is powered by liquid nitrogen. According to the comments accompanying the video the idea was that the engine would drive a pulley system that would pour sweet cream into Adam’s glass of Starbucks Nitro Cold Brew.

Unfortunately we discovered some 1000mm OpenBeam that have distorted ends. The tips were squeezed together as if they were handled by strong pliers on that end. Leaving the tips twisted and the holes oval instead of round.